When former Buffalo head coach Bobby Hurley left the Bulls, fans feared the program would lose some of their dominance in the Mid-American Conference. Now head coach Nate Oats would disagree with that fear.

For the third time in four years, the Buffalo Bulls have punched their ticket to the NCAA Tournament by winning the MAC Tournament at Quicken Loans Arena in Cleveland, Ohio.

This time it would come at the hands of the Toledo Rockets by a final of 76-66. Unfortunately for the Rockets, they were without MAC player of the year Tre’Shaun Fletcher.

The story of the game was the high pick and roll between MAC All-Third Team guard Wes Clark and MAC Sixth Man of the Year Nick Perkins. Oates went to this set time and time again, typically against guard Jaelan Sanford and center Luke Knapke. Sanford struggled all night to fight through the large frame of Perkins, and with Knapke sitting back instead of hedging, Clark poured in open jumpers all game to the tune of 26 points.

Perkins, after going just 1-8 in the first half, found a rhythm against a tired Knapke in the second half. “I just slowed down, got to my spot, and finished”, said Perkins. “That really was the big difference”. The big man would finish with 16 huge points.

Toledo would end the game with 3 starters in double digit scoring, led by Jaelan Sanford with 19. However, they were just never able to get over the hump in the second half. “The difference was on us… a couple bad turnovers back to back and missed wide open shots”, said the junior guard. “It was just on us”.

Despite having the NCAA Tournament now staring him in the face, Coach Oats pointed out how excited he was for next season. “Well, if you go to some NCAA tournaments, it is easy to recruit the best players, and you can keep this momentum rolling”, said the second year Buffalo coach. “And the recruiting class we’ve got coming in next year…we’ve got something building”.

Buffalo now awaits Selection Sunday to see where they are seeded and who they will be playing in the first round of the NCAA Tournament.

For the first time since 2013, the Central Michigan Chippewas women’s basketball team will be going to the NCAA Tournament.

Both the Chippewas and the Bulls expected themselves to be in this game after going 17-1 and 16-2 in conference play respectively.

Presley Hudson lit the Chippewas offensive spark early and often, pouring in 11 points going 3-3 from downtown. The Chippewas turned things up defensively as well, as they were able to frustrate Buffalo point guard Stephanie Reid who was 0-2 after the first quarter.

The game would turn on its head in the second quarter, however, as all good MAC Tournament Championship Games seem to. Down 34-23, Buffalo forward Mariah Suchan nearly dove out of bounds to save a loose ball to Reid, who found sharpshooter Cierra Dillard open for 3. This sparked a 17-5 run that put Buffalo up 40-39 via another Dillard 3 ball. Central would calm the storm a bit as Presley Hudson and gang would retake a 43-40 lead heading into halftime.

The second half absolutely belonged to Chippewa senior Tinara Moore. After a scoreless first half (with only 2 touches according to coach Sue Guevara in the post-game presser), Moore established a dominant presence down low. Hudson and Moore dissected the Bulls defense with the high pick and roll as Moore cruised to a 17-point second half performance and finished with 14 rebounds.

Central would extend the lead to as much as 14 before Buffalo made another run to cut it to 4. The Chippewas were able to make enough of their free throws in the closing seconds, however, as Central Michigan punched their ticket with a 96-91 victory.

As mentioned, Tinara Moore’s rebounding down low was too much for Buffalo as double teams failed to slow her down even the slightest. Guards Micaela Kelly and Presley Hudson poured in 26 points each as they frustrated Buffalo’s perimeter defense all day. All starters for Central Michigan finished in double digit scoring.

All-MAC Tournament honors from Central Michigan went to Tinara Moore, Micaela Kelly, and MAC Tournament MVP Reyna Frost who had 10 points and 11 boards in the championship win. Frost scored 14 in the quarterfinal win over Eastern Michigan and 18 in the semifinal win over Miami Ohio. “Thank my teammates and thank my coaches for giving me this award”, tournament MVP Frost said, “preparing me for these games”.

For Buffalo, Cierra Dillard was not her usual self from the field as she really struggled to be efficient. Dillard would finish with 26 points on 6-20 from the field and 5-15 from 3. Stephanie Reid, one of the leaders of this Buffalo team, suffered 2 injuries in the game, the latter of which ending her day.
In inadvertent elbow to her right wrist late in the 3rd forced the trainer to wrap it.

Reid would sit the beginning of the 4th and a sprained ankle at the 5-minute mark would end her day. She would finish with 15 points. A technical foul on Buffalo coach Felisha Legette-Jack with 8 minutes left for disagreeing with a call would prove crucial down the stretch.

Despite 17 turnovers for Central compared to just 5 for Buffalo, the Chippewas overcame this with their persistence on the glass (primarily because of Moore). Central outrebounded Buffalo 44-34 and those extra possessions down the stretch really took the life out of the Buffalo defense.

Buffalo, after a 27-5 regular season record, is still hoping to be a team to receive an at-large bid. “I don’t see how they can’t be”, said Central Michigan head coach Sue Guevara. “They’re one of the top 64 teams in this country”. Coach Guevara also pointed out the MAC Conference was 7th overall in RPI which should work in Buffalo’s favor.

Buffalo forward Summer Hemphill also believes that this Bulls team still has work to do. “The season’s definitely not over”, the freshman said. “We have a longer run to look forward to”.

Game Two of the MAC Championship did not disappoint as the Kent State Golden Flashes squared off against the Ball State Cardinals. Trey Moses got off to a hot start for the Cardinals being a presence down low. But the Golden Flashes didn’t take long to find their groove as Adonis De La Rosa and Jaylin Avery seemed to be unstoppable down low. The two big men would combine for 23 points in the first half. It was a battle of lead changes until Kent State went up 21-14 with 8:26 left to go in the first half. Ball State’s spark came surprisingly off the bench and they would go on a 9 to 3 run. The Cardinals would finish the first half with 12 bench points to Kent State’s 3. Kent’s De La Rosa would go up for a rebound a hit the ground hard. He would come up limping and head to the locker room. The disappearance of Kent State’s big man would eventually lead to the halftime score being tied at 39-39.
The second half looked like it would be all Kent State at the start as Adonis De La Rosa returned and dominated down low. Jaylin Walker also had a huge game for the Flashes and was heating up in the second half. He would end up finishing the game with 19 points. Kevin Zabo, the other athletic guard for Kent State also showed up in a big way in the second half and would finish the game with 16 points. But like in the first half, Ball State would not go away and thanks to Tayler Persons, who finished with 19 points, and Tahjai Teague, who finished with 17 points, brought the Cardinals back in it. As the lead seemed to slip away for the Golden Flashes, Ball State would finally take the lead for the first time since the first half with 2:17 left in the game. The final two minutes were back and forth. Jalen Avery hit a clutch 2 to go up 74-71 and after a missed 3 by Ball State, Walker would hit a free throw and allow the Golden Flashes to ultimately seal the game. The final score of the contest would be Kent State 76, Ball State 73. Kent State’s starting lineup was very balanced with De La Rosa scoring 17, Avery scoring 16, Walker scoring 19, and Zabo with 16. Kent State will move on to play the #1 seeded Buffalo Bulls in the MAC Tournament Semifinals tomorrow

By: Deontae Shahid
The top-seeded Buffalo Bulls and eighth-seeded Central Michigan Chippewas faced off in the first quarterfinals game at Quicken Loans Arena in Cleveland. The Bulls were able to pull away at the end and won 89-74.
Bulls junior guard Jeremy Harris scored his season average of 15 points in the first half of the game and finished with 10 rebounds and a career high 27 points. Junior guard, CJ Massinburg, contributed18 points for the Bulls in the win.
The Chippewas were led by forward Cecil Williams’ 21 points. Kevin McKay provided a spark off the bench with 16 points.
The Bulls went into the half up by nine with a 47-38 lead. The Chippewas were able to pull within three, but the Bulls went on a 12-0 run with 2:17 left in the game.
The Bulls were able to outrebound the Chippewas 51-36 with 19 of those being offensive. The Bulls were also able to hold the Chippewas to 21.4 percent shooting from the three-point line.
Buffalo will play the winner of the Kent State and Ball State in the semifinals on Friday around 6:30 pm. 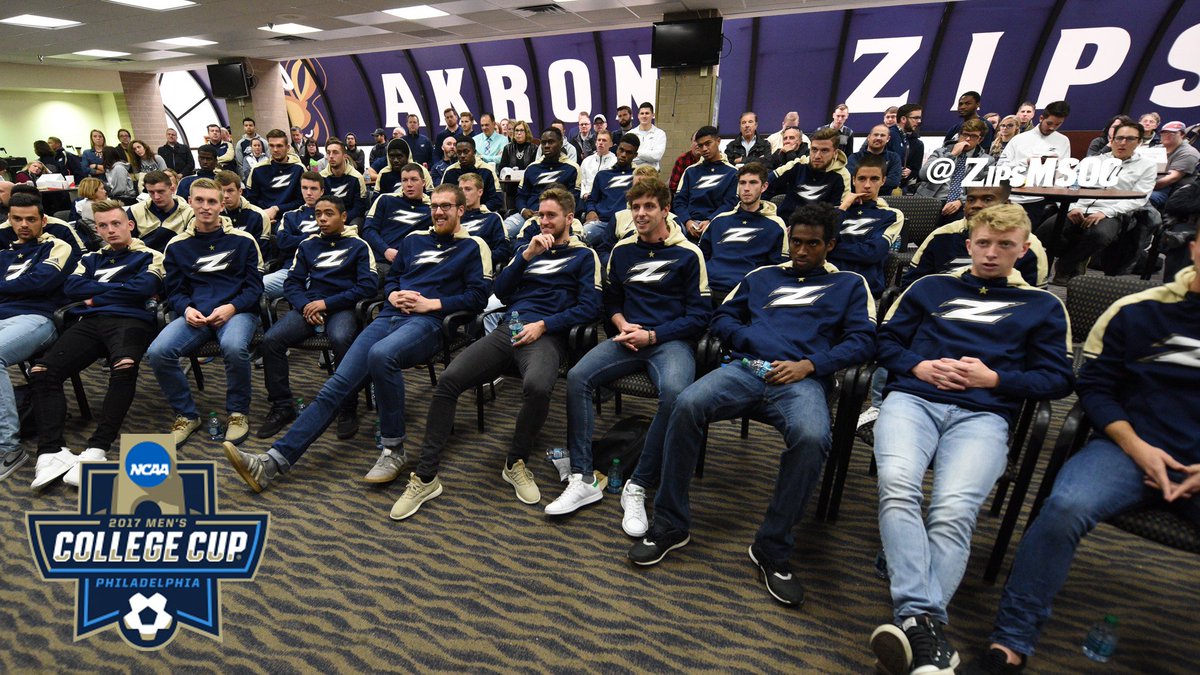 The 2017 NCAA Men’s Soccer Championship Selection took place Nov. 13 that featured the Mid-American Conference Champions, the University of Akron men’s soccer team. The Zips earned a No. fifth national seed and will host the winner between the Washington/Seattle match in the second-round action on Sunday, Nov. 19 at Cub Cadet Field.

“You wanted a top four, you wanted the three home games but it’s a really good seed,” head coach Jared Embick said on the draw. “When you break down the bracket, there’s a lot of familiar teams in there that we have played and done well against. If we have the chance to play them, we can take that belief into the game and use that as a motivating factor of what we can accomplish here.”

Akron will make its 11th consecutive and 32nd overall tournament appearance this campaign. Akron is one of four Division I programs that have qualified for the NCAA Championships in eleven seasons, Indiana, Maryland, and Virginia.

The Zips look promising coming off their MAC Championship victory over Western Michigan. The team has won ten consecutive matches, their last loss dating back to early October against the Broncos, 1-0.

“We’ve all been here before,” Senior forward Sam Gainford said after the selection. “I need to learn by example and we have a lot of seniors here on the team that knows what needs done.”

Gainford and fellow Zip forward Stuart Holthusen have scored a total of seventeen goals this season, ten of those goals being in their last five matches.

The first round of games for the Tournament, including Seattle and Washington, will take place on Thursday, Nov. 16.

According to gozips.com, tickets are available now by calling or texting the Akron ticket office at 888-99-AKRON (25766) or visiting The C.P. and Cornelia S. Chima Athletics Ticket Office at InfoCision Stadium-Summa Field (located at 375 E. Exchange Street, near Gate 1 at the southwest corner of the venue, at the corner of E. Exchange and S. Union streets) Monday through Friday, from 9 a.m. to 5 p.m.

Season ticket holders can purchase their same seats for the NCAA games by calling our texting the ticket office.

Prices for all NCAA games are $15 for reserved, $10 for General Admission and we have a family four pack in general admission for $35.