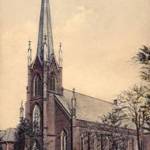 A group of German immigrants led by Pastor Peter Jacob Buehl became the first Congregation of the German Lutheran Church, when Akron was a village of 3400 people in 1854. Rival Middleburg and Cuyahoga Falls threatened to engulf the struggling town of Akron. The Zion’s first building was located at the corner of High and Quarry. By the 1870s, upon the arrival of Pastor William Lothmann who would remain at the church until 1926, the Zion was in need of a new building due to the rapid growth of the congregation. Samuel Perkins donated the land which the church now stands on. The original building was 5,000 square feet complete with a 150 foot high spire and opened for worship on 16 September 1877. The building cost $16,000 to build. The church added a brick school to its grounds in 1889, which would be later added to in 1915, as well as an auditorium. The church later expanded to account for the once again growing congregation. Pastor Clarence Spiegel would come to establish formal Sunday School during his service from 1921 to 1930. For nearly 160 years, Zion Lutheran Church, with its deep German heritage has been alongside the city of Akron as it has grown from a struggling town, to an industrial Midwest center, to the modest city it is today.