About 90km north of Diyarbakir there is a place in the Taurus Mountains where the Dibni Su, one of the two main sources of the Tigris River, comes flowing out of a large cave. The Dibni Su actually originates much deeper in the mountains, but the ancient Assyrians thought this to be the source of the Tigris and it is a dramatic landscape that had great significance to them. The modern name of the place is Birkleyn Gorge.

We know that the Assyrians marked this spot as significant since there still exist four small rock inscriptions made by the Assyrian kings Tiglath-pileser I (1114-1076 BC) and Shalmaneser III (858-824 BC): three in the lower cave from which the Dibni flows, and one in an upper cave a few hundred feet so higher up in the mountains. We have textual and other representational art that tells us that the kings presided over commemorative events that happened here three thousand years ago. This was an area far from the Assyrian frontier and one has to imagine that this was an arduous journey for the Assyrian king and his court to make, deep into territory outside of their military control.

If you look at the above photograph you will see two black spray-painted graffiti on the far left (a modern form of rock inscriptions, I guess). The Dibni Su flows out of the cave in this photograph and in places within the cave is well over one’s head in depth. The photograph below shows the area with the two black graffiti in greater detail and you can see that just above the spray paint, and a bit to the right of a circular broken area on the rock face, is a figure of the Assyrian king Tiglath-pileser I. To the king’s left is a cuneiform inscription, barely legible on the uneven surface. He is seen in profile, with a flat topped hat and flowing robes.

During our bayram holidays, we made the long drive from Bismil north across the last vestiges of the northern Tigris River valley and into the mountains to see the inscriptions. It was quite an adventure. The lower cave (seen in the photographs above) requires a bit of shallow wading and navigating some steep slopes to find. The upper cave in the Birkleyn Gorge can only be accessed by a trail crossing a narrow rocky ledge at one point and requiring a scramble over boulders with uneven footing well-worn by visitors. The inscription at the upper cave sits at the entrance. Here Willis is pointing to part of a cuneiform inscription (it is the word “Assur”) and you can see the cuneiform wedges quite clearly (again beneath a modern graffiti). The figures of the king in all four inscriptions are small, maybe three feet tall.

It was quite an interesting trip and a nice break from work at the dighouse. The next day I heard a bit of (cheerful) grumbling about aching legs from the climb and a few calls to revisit the cool caves and icy waters of the Dibni Su as we returned to hot and dusty Bismil and to work on site at the end of bayram. 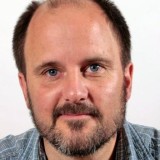 6 replies on “A visit to the source of the Tigris.”

Willis: Could this possibly be Philmont-east? (tongue- in cheek). The blog is educational and excellent!

Thanks for the report on the visit to the source of the Tigris, as well as the posts on the dig. I called attention to it today at http://ferrelljenkins.wordpress.com.

[…] Take a look at three nice photos posted by Matney at the Ziyaret Tepe website here. […]

Thanks, Ferrell, for the link. It’s a really interesting place to visit, but a bit off the beaten path.

You were so polite about those wretched modern tags. Breaks my heart that even in the remotest places now someone will have gone ahead to spoil what you’ve come to see. I’d love to get there too but am no good at climbing about on narrow ledges so probably won’t ever happen.

I am an archaeologist studying in Iran, Iraq and Iran for Antiquities very sorry and I hope that day comes, the proper way to protect antiquities.