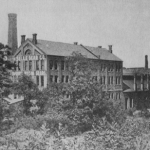 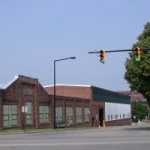 The Selle Gear Company building complex of approximately 70,000 square feet is still located on its original site, surrounded by the industrial development which proved vital for Akron. From Akron’s Gilded Age in the 19th century, the rubber boom of the early 20th century, the urban renewal of the 1960’s and the rehabilitation of the former industrial sites in the 1990’s, the complex represents the continued adaptation made by the city over the years. The Selle Gear Company was built in 1887 and its continuous economic growth until the end of WWII produced building expansion in all directions, with the newest additions built during WWII in 1943. Ferdinand Selle was one of the great inventors of the Second Industrial Revolution during the 19th century, emigrating from Germany in 1852 and moving to Akron after living in Detroit. Selle’s patents had caught the eye of investors in Cleveland and in Akron which sparked the development of the Selle Gear Company, later Akron-Selle. The Selle Complex has maintained its architectural integrity as a 19th century industrial building of the railroad and canal legacy era of Akron. It also has served the needs of the automotive industry in the 20th century. Operating at the same location for 110 years, while innovations in transportation changed from horse drawn carriages to cars, trucks, and other automobiles, The Selle Company also innovated from production of wagon and carriage hardware to gears and gages for gasoline tanks as well as metal stamping parts for trucks, aircraft, and military ordinance until the early 1950s. Stamping continued on the site until 1997, with a dwindling workforce of 25 employees. By 1998 the Selle complex was put up for sale and sold in 2003 when it became the current site of the Ohio Brewing Company.