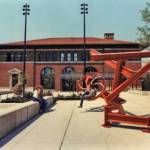 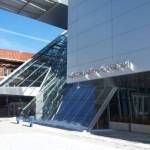 Originally known as the Akron Art Institute, the Akron Art Museum was opened in February of 1922. Located in two rooms in the basement of the public library, the Institute was financially limited, mainly relying on volunteer workers. In 1924, the city supported the hiring of a professional director but further funding was short lived due to the Great Depression in the 30’s. For the next 15 years the institute was once again using only volunteer workers but it began offering classes and exhibiting local artists to keep it afloat. In 1937, the Institute was moved to a historic mansion but it burned to the ground destroying the building and much of the artwork. After World War II it made its comeback by hiring a professional staff and began to acquire fine art. In 1950 the institute moved back into the old public library but only then did it use the entire building. It was during this time that the institute received national attention as a professional design arts school. However by the 1960’s, the institute changed once more from a school to an actual museum. The focus was then to collect and exhibit art from the 1850’s to the present. By the 1980’s the institute had changed its name to the now current Akron Art Museum and soon relocated to the 1899 old post office building. The Akron Art Museum remains in this spot but in 2007 the building was expanded. The new addition nearly tripled the size of the museum, from 21,000 square feet with the addition adding on 63,300 square feet more. It was designed by the architect firm Coop Himmelblau which began construction in May 2004. To this day the Akron Art Museum has several galleries’ holding various genres of art.