Menu
First Year Voices is dedicated to publishing exemplary student essays written during the First-Year Composition Program at The University of Akron. We strive to include a broad variety of works that showcase the range of topics and genre students are exposed to in these courses.
Browse: Home   /   2014   /   July   /   30   /   Homarus Americanus 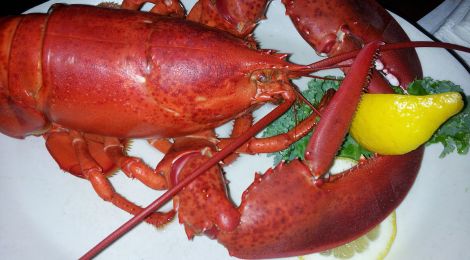 Homarus Americanus: a large marine crustacean with a cylindrical body, stalked eyes, and the first of its five pairs of limbs modified as pincers, found around the state of Maine in the United States. This luxurious crustacean has been used in The Maine Lobster Festival since 1947. It took a great writer by the name of David Foster Wallace to bring out the PETA in everyone reading his magazine essay titled “Consider the Lobster.” “So then here is a question that’s all but unavoidable at the World’s Largest Lobster Cooker, and may arise in kitchens across the US: is it alright to boil a sentient creature alive just for our gustatory pleasure? A related set of concerns: Is the previous question irksomely PC or sentimental? What does ‘all right’ even mean in this context? Is the whole thing just a matter of personal choice?” (Wallace 243). This entire essay that he wrote consists of questions like these and comments that unless read horribly wrong suggest that Wallace questions the possibility of “humanely killing” a lobster. He also questions whether or not these creatures feel pain or not. Wallace wrote this in the late 2000s and since then there have been many different studies on lobsters to test if they feel pain, and if so, what would be the most humane way to kill them.

Crustaceans — crabs, prawns, lobsters and other creatures — are generally not protected by animal-welfare laws, despite huge numbers of them being caught or farmed for human consumption. The exclusion has been based on the belief that these animals cannot experience pain and instead only have nociception, a reflex response to move away from a noxious stimulus. “However stuporous the lobster is from the trip home, for instance, it tends to come alarmingly to life when placed in boiling water. If you’re tilting it from a container into steaming kettle, the lobster will sometimes try to cling to the containers sides or even to hook its claws over the kettles rim like a person trying to keep form going over the edge of a roof” (Wallace 245). In this Wallace states that these creatures respond to certain stimuli provided by the steam of the pot. In a study conducted by Robert Elwood of the Queen’s University Belfast in Newcastle, UK, he and his colleague Barry Magee arranged two different experiments to test whether the crustaceans responded to certain stimuli. They wanted to prove the theory that creatures will respond to pain by learning. They set up the first experiment by setting up two shelters for shore crabs; one had no danger and the other would send an electric shock to the crab and continue to do so if the crab remained there. When tested a second time, the crabs that were subjected to the electrical shock wasted no time going directly to the other shelter. The second experiment was comprised for hermit crabs with the same kind of method, and ending with the same result. This data was reported to the deputy director of the Universities Federation for Animal Welfare, Robert Hubrecht, where he then stated that the data was very similar to the data received from testing this same method on mice. “Whether my experiments will change how the seafood industry works, I doubt it very much, but it might be the first step. Animals should have a good life and a good death, and I think in many cases these crustaceans don’t have a good death,” said Elwood after publishing his findings. Elwood also notes that this does not conclude that crustaceans in fact feel pain, but this does provide evidence that they could. Wallace also states in his essay, “There’s a part of the brain in people and animals that lets us feel pain, and lobsters’ brains don’t have this part” (Wallace 245).

“We will never know how the lobster feels,” said Robert Bayer, executive director of the Lobster Institute. His institution is focused on finding a way to kill a lobster in the most humane way possible. A study in 2005 conducted by Norwegian scientists shows that lobsters do not have a brain, thus concluding that they would not feel pain. Wallace states in his essay that the lobster has eight different nerve clusters, all able to react if one or more is severed separately. From this essay, Wallace writes, “there are… ways to kill your lobster on-site and so achieve maximum freshness. Some cooks’ practice is to drive a sharp knife point-first into a spot just above the midpoint between the lobster’s eyestalks. This is alleged to either kill the lobster instantly or to render it insensate” (Wallace 249). According to the research done at the Lobster Institute with Bayer, there are at least three ways to kill a lobster quickly. First you could have an 80,000 pound machine called the “Big Mother Shucker” which kills the lobster in six seconds using high pressured water. Or you could pay thousands of dollars to buy a CrustaStun, which ultimately kills the lobster with one electric shock through the body. And one that is most commonly used is the knife method of cutting the lobster down the elongated middle of its body when it is placed upside down. None of these are a method that would be best for killing a lobster in a humane way, suggests Bayer.

PETA (People for the Ethical Treatment of Animals) has tried to use the information provided by Elwood to drum up a case that lobsters and other crustaceans ofthe sort should be subjected to the same laws as regular vertebrates. Although they have been thwarted many times by the seafood industry due to Norwegian findings, they still try to advocate not eating the lobsters. In fact, if PETA got their way, lobsters would inevitably be a non-existent food source for many Americans due to the fact that there is really no humane way to kill a lobster. Not to mention the Maine Lobster Festival being no longer. And not only will the lobsters be gone, so will all crustaceans of the sort; crab, prawn, shrimp, etc. PETA does a great job at making people feel guilty about consuming other previously living creatures and defiantly advocates the whole Vegan diet. And Wallace does a considerable job at making his readers think about the food they consume with the following questions, “Do you think much about the (possible) moral status and (probable) suffering of the animals involved? If you do, what ethical convictions have you worked out that permit you not just to eat to savor and enjoy flesh-based viands?” (Wallace 253-254). In all truthfulness, Wallace does a fantastic job at hinting towards a familiar phrase “watch what you eat,” but he does it in such a way that makes the reader want to learn more about these creatures. Upon reading this essay, I am not going to lie, I did in fact look for something to prove or disprove that lobsters feel pain.

Spector, Dina. “Is There A Humane Way To Kill A Lobster?” Business Insider. Http://www.businessinsider.com/is-there-a-humane-way-to-kill-a-lobster-2013-9