Menu
First Year Voices is dedicated to publishing exemplary student essays written during the First-Year Composition Program at The University of Akron. We strive to include a broad variety of works that showcase the range of topics and genre students are exposed to in these courses.
Browse: Home   /   2014   /   July   /   30   /   The Center of the Universe and All of the Answers 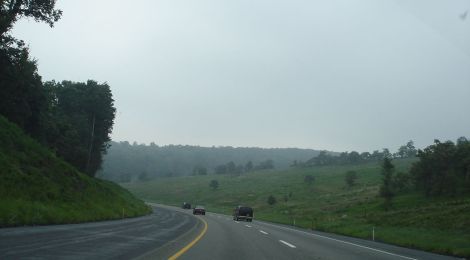 The Center of the Universe and All of the Answers

There was a time in my life when I thought I held all of the answers to any question ever asked. This time was very brief, now that I am reliving it. But as it was happening, it felt as though there was no concept of time; time was merely a forgotten conspiracy that our minds would faintly linger back to when we remembered what our actual lives consisted of, aside from our trip. In all reality, the exact amount of time, if a measurement is required, was twelve hours. To be quite honest, it is difficult to say whether these were the shortest or the longest twelve hours of my life, although the more I rethink them, it becomes increasingly harder for me to decide. Aside from the latter argument, and to refute both of the respective sides, I held the answers to life’s big questions, no matter how much of a haze I seem to be in when I recall this event.

It was in the car of my best friend that I spent those hazy but enlighteningly clear twelve hours. If I was told to go back and change one thing about that evening, I would ponder my way onto a psychiatrist’s oddly cushioned couch because of the anxiety it would cause. That is how precisely perfect those many moments were. Of course, to the majority of people, I assume, driving twelve hours in a 2012 Lexus would not be a terrible experience, if it was all highway driving; which it was.

Mine and my friend’s relationship is hard to explain, but simple for us both to grasp; go figure. There seems to be tiers of friendship that exist in which a typical person’s best friend is at the top of the food chain, or the lion. In our relationship, there is a theoretical step that is one higher than the lion: this could be referred to as the water (keeping the food chain analogy because lions drink water to survive, placing my friend above the lion). Although this concept may seem very strange to others, it makes absolute sense to Cody and me. It is something that our minds both comprehend without ever having to discuss. Cody is the owner of the Lexus in which we rode. He drove, I sat shotgun.

Cody’s car was our sanctuary that evening, as it has been for many drives, but this was the first drive where we had all of the answers. Our destination was, at first, simple: home. The drive from Syracuse into the Commonwealth of Pennsylvania went so exceedingly well that our destination was not what mattered. Home was just a theory that had many memories to prove its existence, but much like our grasp on time, home no longer mattered. Our lives revolved around that drive, around the time that we spent driving in the Lexus. Specifically, the center of the universe was less than concrete. The conversation, not the drive, was what held us captive. The attention holder was the combination of the music we loved most, the special way the words flowed between us in those moments, the highway passing beneath us, and the warmth of our feelings in that time and place. It was twelve hours of flying on Red Bull, pouring large doses of water down our dry throats, and the continuous flow of subject after subject that, when I look back, appear as one colossal exposition. This is the reason why we stopped in Scranton (well, that and because we love the NBC network): to stop the car, take a picture of Scranton to say that we were there, to turn the car around, away from home, and start towards Philadelphia. It was not time nor destination. The fact of the matter was the drive and everything that happened during the drive.

Some of the conversation was song. We used a wonderful twenty-first century device, called Spotify, to search whatever song we wanted. Part of the reason copious amounts of water were consumed was because our mouths were deserts from singing. We performed the most rambunctious of show tunes, and other good songs, of other good music, because “good music” extracts emotion from listeners, and many extracted emotions there were. Every song was composed right then, exclusively for us. We had many soundtracks that night, but, much like our conversations, our music echoed into our own van Gogh-esque masterpiece. We were always on the same level, each song bringing out the same emotion in both of us, allowing the music to be reconstituted as conversation, even though we were singing, not conversing.

When we were not singing, we were talking, only stopping when a song came on that forced us to focus our attention. Since we had sung such an astronomical amount, it was remarkable we could even talk. We ignored the pain and did it anyway. I am a chatty person, but on this particular night, I talked more than any other night. With anything we talked about, we could keep talking for eons. No matter how many miles we drove, our headlights shining on the highway, the air conditioning set on sixty-eight, the tingling feeling of Red Bull in my cheeks, the hardening mint-chewing-gum in my mouth due to lack of saliva, and the exciting feeling of open space surrounding the Japanese glass that kept us isolated from the rest of the world, we could keep talking and driving and living like that forever because the center of a collective universe was a conversation that held all of the answers.

Cody and I discussed everything. We talked about our families, our friends, each other, our community back at home, religion, the supernatural, politics, music, the arts, our futures, how our futures were entangled with politics, music, and the arts, and we talked about the world. We spoke highly of the world and then not so highly of the world, but we felt as though we were high on top of the world, all at the same time in the same car in the same drive. Driving was the plan and speaking in circles was the result. We would go over the same topic more than once, each time realizing something we had not before. Every word opened my mouth, literally, and my eyes, figuratively. We agreed on topics. Also, we disagreed on topics, but only to start the entire conversation over until we agreed. We smiled, gave angry looks, interrupted each other, argued, laughed until we cried, and drank more water and a lot more Red Bull.

We reached Philadelphia somewhere, somehow in the course of all of this. Since we chose an address at random on the GPS, we found ourselves in the ghetto just as it was getting dark: “We’re going to get shot” was the conclusion that we came to. Since there was a reality, unfortunately, we had to turn around and go home. But as our highway miles picked up again, so did our conversation and our music. It seemed that we had started all over again, and that we had everything figured out. It was not until we pulled the car into the garage and the door automatically closed behind us that we realized we really don’t have any of the answers at all.