Menu
First Year Voices is dedicated to publishing exemplary student essays written during the First-Year Composition Program at The University of Akron. We strive to include a broad variety of works that showcase the range of topics and genre students are exposed to in these courses.
Browse: Home   /   2014   /   July   /   30   /   Trend in Diesel 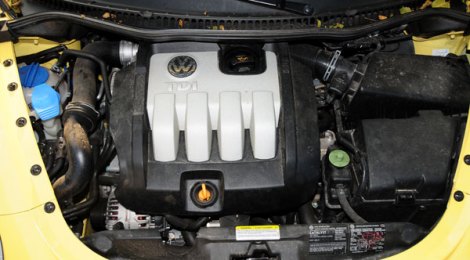 When you picture a diesel engine, what do you see? An old truck, dirty and heavy with clouds of diesel smoke pouring out, and a foul smelling odor to when it burns. You can hear the ticking of the high pressure cylinders combusting away. Diesel has come a long way from what it used to be. The once thought of diesel engines as being dirty and less efficient than gasoline powered engines is no longer the case as new technologies provide this style of engine to begin a trend in fuel efficiency and popularity. With so many advantages of diesel, they make more sense to potential car buyers and provide a big trend on fuel efficiency.

As a concerned environmentalist, President Obama has created fuel efficiency requirements since the start of his presidency in 2009. These requirements get gradually stricter as the years come by to give motor companies time to test out new technologies to provide better fuel economy. The want and need for better fuel economy has come with this century as we look to find a way to use less fossil fuels and get away from using nonrenewable resources as a main form of energy. Environmentalists are aware that we are stripping away the energy underneath the earth’s crust and are looking for better means of transportation. A technology that has always been around, but has not gained popularity until now is the diesel engine. The diesel engine is different than a gasoline engine in multiple ways. Diesel engines combust the fuel by great pressure of the cylinders. This pressure of up to 30 pounds per square inch (psi) causes the fuel mixture to heat up rapidly to the point of combustion, thus in turn moving the cylinder. This compared to a gasoline engine, which injects fuel into the cylinder, but it does not get compressed like a diesel, is not as energy efficient. The fuel and air mixture then gets ignited by a quick volt of electricity from the spark plug and combusts, thus moving the cylinder. This means these engines do not have spark plugs and they do not need them, unlike their more popular predecessor the gasoline powered engine. The fuel efficiency of diesel is automatically higher because they can run on much less revolutions per minute (RPMs) in the motor because the motor harnesses more of the fuel’s energy instead of wasting it. Lower RPMs means the less frequent the cylinder needs fuel, providing greater fuel economy. A typical four-cylinder car running on the highway at 65 miles per hour will be running at around 2500 RPMs rather than a diesel powered engine running at around 2000 RPMs in the same four-cylinder set up. To put this in perspective, a diesel car with the same displacement as a gasoline car will get over 40 miles to the gallon compared to 30 respectively. Diesel cars can run on vegetable oil and kerosene as well with a few simple modifications that still provide much better fuel economy compared to the gas engines. These savings in fuel fill ups will overcome the normally higher prices in diesel versus gasoline at the pump.

Diesel fuel in general has much more energy per gallon wrapped up in it as well. According to Volkswagen, diesel fuel is less refined than regular gasoline, making it more energy dense. The average energy density of diesel is around 147,000 BTUs compared to gasoline’s 125,000 BTUs (TDI Academy). This means it requires less fuel for diesel to do the same amount of work for gasoline. If you combine the higher energy density and the design of the diesel engine, it will come out to be a 30-35% better fuel efficiency, which means more savings at the pump.

Not only do diesel powered engines get better fuel economy, they have many other benefits that give them a great value to potential buyers. Diesel engines have been proven to last almost twice as long as any gasoline powered engine. The reason for this is because a diesel engine must be built to withstand the serious amounts of pressure it sustains when it is being combusted. A typical diesel is built out of cast iron, compared to a gasoline engine built out of the lightest aluminum alloy. This means they can last over the repeated and constant combustions of driving. The diesel engines are heavy duty and that means more longevity. Diesels have much less parts that can go wrong as well, since they do not have an ignition system to ignite the fuel they won’t ever need a tune up like gasoline cars every 75,000 miles where you put in new spark plugs and fuel filters . They are simpler engines with almost maintenance free driving for the life of the vehicle. Since a diesel engine is known to last much longer than gasoline engines and has been proven to be more reliable in almost every aspect, it is no wonder they are getting so much attention. This benefit in itself is a huge reason as to why these newer diesel powered cars are beginning to trend in America.

In the past mid-sized diesel passenger cars have been few and far between. But these numbers have skyrocketed in recent years. According to registration data from research firm R.L. Polk & Co. show sales of diesel cars and light trucks rose 35 percent from 2008 to 2012. Looking only at cars, the growth was even more impressive. Polk reports that 13,909 diesel cars were registered in 2008. By 2012, that had jumped to 92,156—an increase of 563 percent. This percentage shows the explosive transformation of a once rare item into a more popular choice for Americans (Linkhorn).

Across the Atlantic Ocean, there has been a much higher demand for diesel powered vehicles rather than gasoline. Diesel prices are actually cheaper per gallon and European users pay a hefty premium for gasoline. This also provides a better motivator for consumers to look into purchasing a diesel car instead. Jonathan Browning, chief executive of Volkswagen of America, stated in a recent interview, “We want more and more manufacturers to bring diesels out. It will expand the market, not slice the pie into smaller pieces” (Muller). This means that he is excited to see automakers come out with their version of diesel cars to increase the exploding trend of diesel cars. Volkswagen has been the long producer of one of the only diesel fleets in America. Its famous TDI engine has been proven and the car keeps the resale value much more than its gasoline cousins.

With modern technologies wrapped up into a diesel engine, they no longer smoke and blow black soot out when there is too much fuel in the cylinder unlike the older style of diesels. These older generations proved to be just as reliable but really were dirty, foul smelling and not aesthetically pleasing. New generation forms of exhausts and catalytic converters combined with better electronic fuel injection provides an engine similar to a gasoline engine where there is no smoke and actually burns cleaner than gasoline. Forbes staff, Joann Muller went to the Chicago Auto Show and stated, “General Motors debuted a 2.0L turbo-diesel version of its best-selling sedan, the Chevrolet Cruze compact. Built in Ohio, it uses a version of a diesel engine GM already sells in Europe and other parts of the world. GM said it is the cleanest diesel passenger car engine it has ever developed and will get 46 miles per gallon in highway driving” (Muller). This gives diesel engines a good name as even the biggest names in the automobile industry is making the leap to diesel cars. Designers and engineers for car manufacturers see diesel as the future and see many benefits in switching over.

This massively growing trend in the want and need for better fuel economy brings these new diesel technologies in to play more than ever. We have been perfecting the gasoline engine for over one-hundred years now and there is only so much you can do. We still haven’t found a way to harness all of the gasoline’s energy in a way to become more fuel efficient. Engineers must look to other forms of power such as battery powered vehicles and various other types of fuel such as solar power and hydro-powered motors. Although these forms of energy are extremely appealing, we have not yet figured out how to make these types efficient and cost effective. They either cost too much to produce little energy or they just can’t provide enough energy to make it worthwhile. These new forms of alternative energy provide great promise in future developments but will not provide us with reliable, practical and cost efficient for years to come. We are in a transition period of an engine with much better promise than gasoline engines. This will help us to make the leap to alternative fuels that are renewable and more environmentally friendly.

As we continue to see stricter restrictions on fuel economy, automakers look for more options to stay ahead of the game. We also see consumers looking for better and more fuel efficient ways for their daily commutes with rising gas prices. Diesel cars is a trend that is now, and a trend in the way people think about motors. Diesel cars just make sense, since they provide better fuel economy, longer lasting engines, and less maintenance. The money saved from using less fuel overrides the higher cost of diesel fuel quickly and is worth it. Wipe away the old memories of dirty, dusty and smelly diesels and look forward to clean, fuel efficient and reliable transportation. Diesel is coming back and diesel is now.