Menu
First Year Voices is dedicated to publishing exemplary student essays written during the First-Year Composition Program at The University of Akron. We strive to include a broad variety of works that showcase the range of topics and genre students are exposed to in these courses.
Browse: Home   /   2015   /   March   /   13   /   The Misinformation About Diet Soda 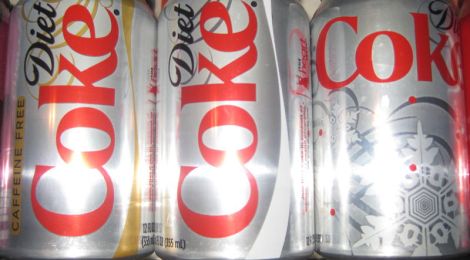 The Misinformation About Diet Soda

A popular thing to do in America is to drink diet soda to lose weight or while dieting. This however is not the right thing to do. More and more people are starting to realize diet soda is just as bad or worse for you than regular soda but there are many people still misinformed about this fact. On the University of Texas website, there is an article that claims that “Fifty-nine percent of Americans report drinking diet soda on a regular basis, often to assist with weight loss goals and improve health” (Diet Soda). And it does not help that an article posted on Fox News goes as far as saying “Diet Soda [is] Better for Dieters Than Just Having Water” which is not true. The correct information about diet soda needs to become known to everyone.

The author of the article on Fox News does not actually state that diet soda is better for you in the body of the article. That misinformation is located in big, title formatted letters on the headline of the article. It is probably safe to assume that some people just browsing the Fox News website saw the headline, moved on, and went on thinking that diet soda is better for you if you are trying to diet than just having water. Some people may have been hooked into the article by seeing this surprising claim. If the article did manage to hook someone in, they would find out that the information about diet soda being better than water came from some study involving only about 300 people. Later in the article it even states that Dr. Devi Nampiaparampil pointed out “some ‘flaws’ with the way the study was conducted” which goes completely against what the title leads the reader to believe. Even though the article fixes itself by saying that you should not switch from water to diet soda, there is still more misinformation in this article, and this time by the doctor. She said “people who drink regular soda should definitely switch to diet if they want to lose weight” (Industry…) which is even more dangerous misinformation than the title. Diet soda is not any better for you than regular soda, and it can even be worse!

The true facts about diet soda may come as a surprise to some but if you take the time to look or think about them they make sense. An 11 year Harvard Medical School study of more than 3,000 women has “found that diet cola is associated with a two-fold increased risk for kidney decline.” This is a problem that regular soda drinkers don’t have which may mean that it results from the sweeteners put into diet sodas. In a University of Minnesota study of about 10,000 adults, they found that “even just one diet soda a day is linked to a 34% higher risk of metabolic syndrome.” Metabolic syndrome causes belly fat and high cholesterol which could lead to heart disease. Another problem with drinking diet soda is that it can cause obesity. The University of Texas Health Science Center did a study to confirm this fact. It is the artificial sweeteners in diet soda that causes obesity. The reason the artificial sweeteners can cause obesity is that “Artificial sweeteners can disrupt the body’s natural ability to regulate calorie intake based on the sweetness of foods” which may cause people to overeat because their body is expecting to take in extra calories from the diet sodas. These calories don’t come from the diet soda so people will eat more food to compensate for that fact. A study from the Royal Adelaide Hospital in Australia shows that “Cocktails made with diet soda get you drunker, faster” than if you use regular soda. Some might argue that this is not a negative effect of diet soda, but it still technically makes diet soda worse for you than regular soda. It could be bad for your heath if you get drunk faster.

Most diet sodas also contain preservatives like sodium benzoate or potassium benzoate. “’These chemicals have the ability to cause severe damage to DNA in the mitochondria to the point that they totally inactivate it – they knock it out altogether,’ Peter Piper, a professor of molecular biology and biotechnology at the University of Sheffield in the U.K., told a British newspaper in 1999.” However, it has been a few years since 1999 and some companies, like Pepsi and Coke, have stopped using sodium benzoate in their diet drinks and use potassium benzoate instead. Both of the preservatives have been “classified by the Food Commission in the UK as mild irritants to the skin, eyes, and mucous membranes” (Diet soda is…). One final negative effect of diet soda is that it can cause teeth to rot. Diet soda is still just as acidic as regular soda with a pH around 3.2. It can dissolve the enamel on your teeth and cause you to lose them or need them repaired. Those are just some of the issues that have been found with diet soda, and more are still being found. It is easy to see that unlike what many people think, diet sodas are worse for you than regular sodas.

It is easy to see how this misinformation was put into the public sphere. In recent years it has been a popular trend to try to look really thin by dieting. The soda companies then saw a chance to capitalize on this by making there ‘diet’ drinks, advertising them as healthier for you and with zero calories. The companies did not do research on them to see if those diet sodas were bad for people; the studies finding that they are bad for you are more recent. The fact that diet soda is worse for you is becoming more and more known, but there are still many people in America that believe the misinformation. The media also displayed these diet drinks as a healthy alternative to regular sodas, but is now starting to state the dangers in diet soda.

There are many overall dangers to people believing this misinformation. If people don’t realize the truth, it could cause the obesity rates in America to continue to rise. Obesity would not be the only thing to rise in America, there will also be more cases of heart disease and more cases of kidney decline. This would not be good for this country as a whole. If the extreme happens and this misinformation is in a really high percent of the population, there could be a tooth loss epidemic. The amount of rotting teeth would cause dentists to be over scheduled and some people wouldn’t be able to get there in time before permanent damage happens to their teeth. This could cause the need for more high powered home dental equipment for people who can afford it and for the people that can’t, there would be a higher demand for foods that are easier to chew due to the lack of teeth. This whole idea is a very extreme idea with a low chance of happening, however something like this could potentially happen if this misinformation isn’t taken care of. Something like the tooth example or the increase overall obesity rate would only happen if this misinformation is in the hands of the masses. The dangers of this misinformation in the hands of a few highly influential people is far worse however. If it is in the masses, the media with the help of proclaimed doctors would have the ability to eventually change this culture of misinformation. But, if this misinformation was in the hands of the top ranked doctors, it would be hard to try and argue against them. If they are telling people that diet soda is better, than more people would believe them and the possible negative effects would happen quicker and possibly with the cause of them unknown. Maybe if the highest ranked doctors thought that diet soda was better, they might force soda companies to stop producing their regular soda due to the fact that they think it is the regular soda causing health problems in America.

Diet soda and its negative effects are a major problem in American. However, the misinformation that many people believe about diet soda is far worse than the actual effects of diet soda. If more people knew the truth about diet sodas, there would be less health problems caused by them. This does not mean that people should not drink diet soda at all though. If you enjoy the taste of diet soda then it is fine to drink it occasionally as a treat, and the same can be said about regular soda. Diet soda is worse for you however both can be bad for you. The key to staying or becoming healthy is that everything should be taken in moderation and that you can’t just drink something with ‘diet’ in the name and expect magic results.

← Falling For a Monster
Courage to Stand and Courage to Fall →