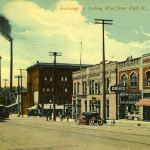 Evans Building in the early 1900s 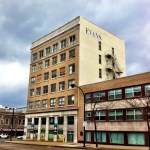 The Evans Building resides on what is perhaps the most significant site in the city of Akron. In the 1830s, Akron was put on the map from the construction of the Ohio & Erie Canal. In order to accommodate the influx of construction workers and travelers who came to see the canal, Henry Clark’s Tavern was built on the corner of what is now Main and Exchange Streets. Not only was it the first hotel in Akron, it was also the first public building erected. In 1836, Seth Iredell was elected Akron’s first mayor at Henry Clark’s Tavern. The site remained a hotel and tavern until a few years before the turn of the 20th century, when the banking industry began to boom in Akron. The original building was then razed and replaced by the People’s Savings Bank. In 1915, The Evans Building and Loan Association took over the site and constructed the upward addition to the building that remains today. Evans Building and Loan Association eventually became the Evans Savings Association. The Evans Building has since housed a variety of financial institutions and law firms and continues to do so to this day. 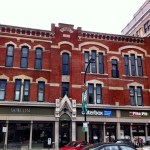 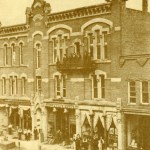 The Kaiser Building (or Kaiser Hall) was built in 1871, just six years after the end of the Civil War. Built by successful Akron businessman Joseph Kaiser, the building’s design was modeled after the High Victorian Gothic style popular in Europe in the middle 1800s. The features of this style are the running bond red pressed brick, high arching windows with contrasting limestone trim, and gabled roofs (which have since been removed from the building). After the building was completed in 1877, Kaiser Hall and its adjacent buiildings became known as Kaiser’s Block. Joseph Kaiser operated a hardware store on the street level, selling tools, stoves, and copper and sheet iron products. Kaiser lived in the luxury loft above his store. The third level of the building was used as a grand ballroom. Kaiser leased out one half of the building to Charles Myers, who ran the company Holloway and Myers. Holloway and Myers sold hats, boots, and shoes. Myers also resided in the building on the upper level. In 1891, Kaiser’s hardware store was taken over by John Gross, who continued the hardware store at the site until the 1940s. Since then, the building has seen its share of various businesses come and go. In recent history, the building was purchased by JJC Investors in 2005, however they were unable to renovate or sell the building. They even tried to sell the building on E-Bay, yet were unsuccessful. The building was then bought by Tony Troppe and the Kaiser Hall Revival Group and has since been renovated and re-opened as a site for businesses. 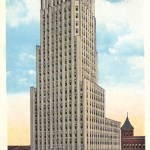 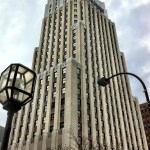 During the 1920s and 1930s, Akron was one of the fastest growing cities in America. At the turn of the 20th century, Akron’s population was just under 70,000 people. By 1930, the population was over 255,000 people. Even in the midst of the Great Depression, Akron had become one of the major industrial hubs in the Midwest. Along with the rubber industry, Akron’s banks became very profitable. In 1929, the Central Savings and Trust Company, formerly the Central Depositors Bank, started a project to signify Akron’s booming population and industry. They created the Central Trust Tower, Akron’s first skyscraper. The skyscraper was designed by the Cleveland architectural firm Walker and Weeks. They designed the building Art-Deco style, a style that represents wealth, power, and security. It was also fashioned after the skyscrapers that dominated New York City’s skyline. When the tower was completed in 1931, it became a unique symbol of spirit and pride for both the blue-collar and white-collar citizens of Akron. The skyscraper stood at 308 feet tall, more than twice the height of any building in Akron at the time. The Central Trust bank moved into the entire first floor of the building and created innovations in banking with its new, much larger lobby. They eliminated the bank teller cages of old and created more personalized banking screens, giving their clients a better face to face experience. The building also housed an arcade of shops in the basement level and a restaurant at the street level. The skyscraper officially became known as the First National Bank Tower in 1931 and is now the First Merit Tower. To this day, it is still the greatest architectural achievement in the history of Akron, both structurally and symbolically. 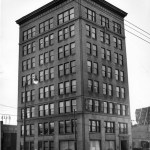 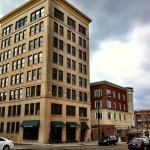 Located near the corner of Main and Exchange streets, across from the Evans Building, the AC&Y Building has been a dominant feature of Akron’s skyline since 1919. The building was originally known as the Herberich Building, as it was built by prominent Akron businessman Charles Herberich. Herberich was the treasurer and later vice president of the Depositors Savings Bank. He was also a big time investor in the rubber, construction, real-estate, and land development industries. Due to the rubber industry’s role in World War I, Akron’s overall landscape was booming. One of the biggest players in the rubber industry was F.A. Seiberling, founder of the Goodyear Tire and Rubber Company. In order to move his products, he created the Akron Canton and Youngstown (AC&Y) Railroad Company in 1912. By 1920, the AC&Y Railroad line stretched over 170 miles and became the main rail line moving rubber products out of Akron. The AC&Y line was also a major transporter of chemicals, non-metallic minerals, coal, plastics, and lumber. It became the most profitable railroad line in America during the 1920s. In 1924, Seiberling rented the 6th floor and some units on the 7th floor to serve as the AC&Y headquarters, and by 1926, they leased the entire building. It was this year that the Herberich Building became known as the AC&Y Building. In 1964, AC&Y was sold to the Norfolk & Western Railway, but the building continued to serve as their headquarters until 1982 when the company ultimately dissolved. 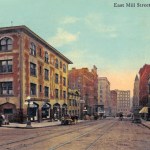 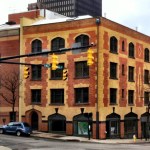 At the turn of the 20th century, Akron had grown into a bustling city. The Ohio & Erie Canal had brought an unprecedented amount of business to the city, including more manufacturing and financial institutions.The growth of these businesses brought more wealth to the city and, in turn, created a demand for upscale residential buildings. One of the gems that this demand created was the Gothic Building. The Gothic Building was designed by the well-known Akron architect Frank O. Weary. Weary was also responsible for the design of other buildings in Akron, including Buchtel Hall, the Carnegie Library, and the Glendale Cemetery Civil War Memorial Building. The Gothic Building was modeled after the Georgian Gothic Revival style, which was popular during the late 1700s and early 1800s. This design style features multi-color brick work, arched windows with contrasting trim colors, and asymmetrical designs. The Gothic Building was attached to the old Colonial Theatre, which was built in 1902 and razed in 1970. The Gothic not only served as a residence building, but it also housed numerous companies over the year. In the 1920s, the Gothic Building became the offices of the editorial “Akron Topics”, a popular publication discussing the current trends in Akron. The site later became home to Edfred’s Record Store in 1941 and All-Ohio Athletic Equipment in 1962. The Gothic has also housed a variety of other businesses since. In 2007, the Gothic Building was purchased by Tony Troppe and a group of private investors called the Gothic City Revival Group LLC. The Gothic in recent years has hosted numerous musicians as a venue and serves as the headquarters for Leadership Akron. The Gothic Building remains one of the finest buildings in downtown Akron today.