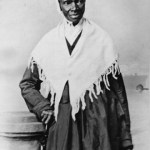 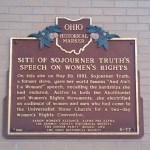 In May 1851, as part of the Ohio Women’s Rights Convention, Sojourner Truth gave an unplanned speech at the Universalist Stone Church located at 37 N. High Street. Being an extemporaneous speech, she did not have a written version of it, but on June 21, 1851, the first published version of the speech appeared in The Anti-Slavery Bugle. Twelve years later, the organizer of the convention, Frances Dana Barker Gage, published a version of the speech in The New York Independent. This version, written with a southern dialect, became known as the “Ain’t I a Woman?” speech. Sojourner Truth was born and raised in New York speaking Dutch for the first nine years of her life and, according to accounts, did not speak in southern dialect.  The earlier version did not contain the phrase “Ain’t I a Woman?” anywhere in the speech and had other details that were markedly different from the later version. Both versions are available at www.sojournertruth.org.

Akron City Prison after Riot of 1900 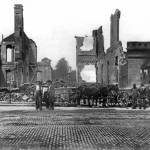 Remnants of city hall after Riot of 1900

The 1900 Akron Riots occurred on August 22, 1900 after a man named Louis Peck allegedly lured a small girl out of town and raped her. After being held in the jail, located within Akron’s City Building, a mob formed outside the building demanding for Peck’s head. When the police did not give up Peck to the crowd, the mob turned violent and shots fired from both sides wounded many and ended up killing 4 year old Rhoda Davidson and 10 year old Glen Wade. The mob, about 300 people, began to throw bricks and dynamite into the City Building, trying to draw the police out. When that did not succeed, they set the City Building on fire as well as the neighboring building, Columbia Hall. When the fire department showed up to put out the fire, the mob cut the fire hoses to stop them but the fire department continued to battle the flames heroically despite the violence. To quell the riots, President William McKinley sent two regiments of United States Army troops to stop the violence and maintain peace as city officials could regain control of Akron. In the aftermath, many of the rioters were put in jail on rioting charges and Louis Peck was found guilty of rape and sent immediately to a jail in southern Ohio. This riot is still the largest on record in the city’s history. 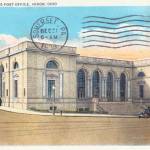 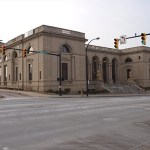 The old Akron post office building was constructed in 1899 in old Italian Renaissance Revival Style, designed by architect James Knox Taylor who had already designed countless post offices around the United States as well as the Ellis Island Hospital building. The post office was rebuilt in 1927 after the city’s population outgrew the space and it needed to be enlarged. The new building, located at current 168 E. Market St., housed the post office as well as the Internal Revenue Department, military recruiting offices and customs offices. The post office moved again in 1975 to its current location on Wolf’s Ledges. The old building became part of the new Akron Art Museum after it moved from across the street due to lack of room. The building still remains the same as when the museum took it over. 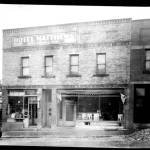 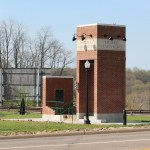 Hotel Matthews, located at 77 N. Howard St., opened in 1925. Owned by George Washington Mathews (1887-1982), it was the first African-American owned hotel in Akron. For reasons unknown, the name of the hotel was spelled Matthews, though the owner spelled his name with only one “t.” When big name African-American musicians came to Akron, they played in the “white-only” jazz clubs, often in the “whites-only” hotels where they were not allowed to stay. Instead, they stayed at the Matthews at a cost of $1 per night or $2.50 per week and played the local African-American jazz clubs after hours. Famous guests included Cab Calloway, Ella Fitzgerald, Louis Armstrong, Count Basie, and Dizzy Gillespie. Hotel Matthews was torn down as part of urban renewal plans in 1982 but the site received an historical marker from the Ohio Bicentennial Commission in 2001. A memorial to the hotel, created by local artist Miller Horns and completed in 2012, replicates the front of the hotel and is near the original location.

Hall’s Corners is the name given to the intersection of Howard St. and Market St. Named for Philander Hall who opened a general store (P.D. Hall & Co.) at the intersection in 1835, it was the main business district in Akron for most of the 1800’s. Several fires in the 1840’s and 1850’s destroyed many of the businesses and buildings around Hall’s Corners. As a result, the business center shifted south with the building of the Masonic Temple in 1870 and the O’Neil & Dyas Co. site in the 1890’s. In 1880, Hall’s Corners was the location of Akron’s first electric “mast”, a 208 foot high post with four arc lights at the top. It was believed that it would light up the entire city.  It was not nearly as effective as anticipated. 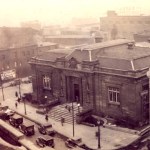 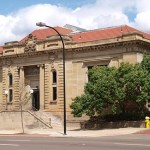 The Carnegie Library was built in Akron on Market Street in 1904 after building started in 1901, due to a grant given to the city by steel tycoon Andrew Carnegie. The grant amount was for $82,000 and the city had an architectural design contest to choose a building that would be constructed using the grant money. The winner of the contest was Akron native architect Frank O. Weary, responsible for building many iconic Akron buildings such as the Glendale Cemetery Chapel. The library offered many amenities such as a catalog of 21,000 books, free access to the public, reading rooms, reference room, study room, lecture hall and a bicycle station located in the basement. Soon, the building became too small for the growing collections of the library and it was moved from the building in 1942 and remained vacant until the Akron Art Museum claimed it in 1947. The Akron Art Museum moved across the street to its current location in 1981. Currently, the building sits at 69 E. Market St., as the offices of Brennan, Manna & Diamond. The façade of the building remains intact and is representative of the Beaux Arts Classical style of architecture meant to resemble a French cathedral. The building is also registered historic building listed in the National Register on January 19, 1983.