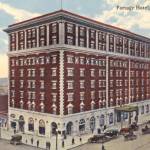 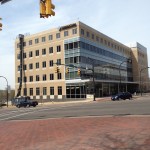 On this location at North Main Street and East Exchange Street sits the SummaCare Health Plan building. Although this building is only twelve years old, this property dates back almost 170 years. On November 20, 1847, the Empire House Hotel opened where the current SummaCare building resides. With the advent of the rubber boom in Akron, a grander hotel was needed. A group of local business men banded together early to provide a modern hotel in 1911. They built an eight-story 170 room hotel on the site of the old Empire House Hotel at the cost of $600,000. The new Portage Hotel opened on June 12, 1912 with a grand banquet that attracted Akron’s elites. It was here at the Portage Hotel in 1935 when the international United Rubber Workers Union was founded. In September of 2003 a garden was planted on the north side of the SummaCare building to honor the URW. October 20, 1923 was a day of infamy for the Portage Hotel. Marion Webb, who owned four horses at Northampton race track, fatally shot Judge Frederick Gerhardy and wounded Judge Peter Callen at noon in the Hotel’s main lobby. The two judges banned Webb from the track after accusing him of “preventing his horses from winning”, so Webb sought revenge. The Portage Hotel closed in the spring of 1965. Irvin Apelbaum was the last owner of the hotel and saw its conversion into a nursing home, as he continued to own the building thereafter.