THE CLIENT COUNSELING COMPETITION IS HERE!!
Dean Matthew Wilson looks forward to hosting an IntraSchool Competition on January 13, 14 and 15th to determine the teams that will represent Akron Law in the 2015 ABA Client Counseling Competition! All students – 1L, 2L, 3L and 4L are welcome to participate.

Entering the competition is easy!

1) Find another law student to serve as your team member

4) Join us on January 13, 14, & 15th for the competition. The time and room assignments will be sent to teams in December

5) Winning teams will be sent to the February 2015 Regional Competition in Pittsburgh, PA 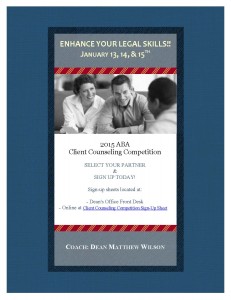 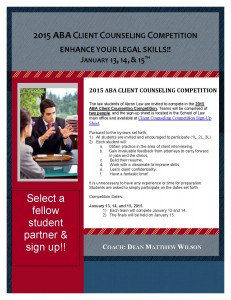 We formally invite you to join Dean Wilson and the Senior Energy Advisor to the Korean Consul General, Peter Schroepfer for an EXCITING and RARE opportunity to discuss Korean & Asian Energy Policy – LIVE with the University of Wyoming School of Law!

The live feed will begin at 2:10pm in the Goldberg Room on October 23, 2014. This is an amazing opportunity to network with a legal field expert and law students from across the country right here at Akron Law!!

We look forward to seeing you next Thursday!!! 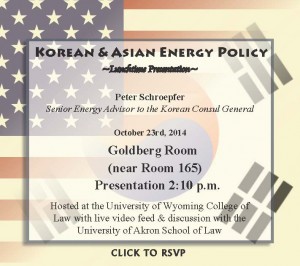 Dean Wilson welcomes your questions, comments, and feedback on any topic related to the School of Law. If you cannot attend either one of these sessions, but have a question or comment for the Dean, he encourages you to contact him in person or via e-mail at mjwilson@uakron.edu

A number of students have asked me what is causing all the faculty buzzing and meetings.  Well, simply, a number of individuals are being interviewed for open faculty positions.

The process for appointment involves a special faculty committee that reports to the full faculty for the faculty’s decision.  The process starts with an identification of one or more vacancies.  The appointments committee advertises the open slot in various media and sometimes by letters to or notices in various legal newsletters and web-sites.  They can also solicit recommendations from faculty at other schools or interested parties.  In addition, the Association of American Law Schools [AALS] has an elaborate process to assist in recruiting.

The AALS process includes a periodic newsletter with job openings, and job requests and individuals and schools can respond to those notices.  There is also an AALS two day meeting to help faculty and prospective faculty meet.  Prior to this session, the AALS also distributes the resumes of numerous individuals who desire teaching positions.  Appointment committees at law schools review those lists and can either contact someone directly or select a number of them to meet with appointment committee members at this two day event usually held in Washington, D.C. , and affectionately called the “Meet [Meat] Market.”

After the event, the appointment committee for the law school may invite a few prospects to campus to meet with more faculty and students and staff and the Dean.   Prospective faculty members decide which of these on campus visit offers to accept.  Once this match occurs, the candidates come to campus for the interview.  Other candidates may, of course, come to campus, through processes other than the AALS process [direct solicitation, responses to advertising, word of mouth].

The appointments committee then meets and prepares a recommendation to the faculty, which then votes and sends the recommendations onto the Dean.  The Dean’s job is then to recruit in priority order the candidates the faculty recommended.

Whew!  So you should be seeing a number of prospective faculty member  candidates over the next weeks.  You should also hear more faculty hallways discussions about candidates.  The end result will be great new colleagues for us and great new teachers for you.

I’m sure many of you have been reading the series of articles talking about the lack of jobs for law school graduates and also the games that some law schools are playing in exaggerating their employment numbers.   This topic, as you can imagine, has also been a source of numerous conversations by law school deans across the country.

So, let me try to put this issue in some perspective.  Of the 134 members of the class that graduated in 2010, 91.8 percent reported that they were employed 9 months after graduation.  Of those 123, thirty percent went into solo or small firm practice.  Twenty three percent went to work in government (including judicial clerkships).   One- fourth worked in business and industry.  A few are working in academic settings ( 5%).  A few more are employed in public interest work (6%) and some got jobs in larger firms (6.5%).

So the bottom line is that our students got jobs. They did not necessarily get the jobs they wanted  but they are working and, with a few exceptions, using their legal skills and training.  The average salary for those who reported their salaries is $55,980.  Only about 40% in fact report their salary, so this number may be higher or lower but it does give us a base for comparison with other schools.  And because of our affordable tuition,  our class of 2010 students had a relatively low law school loan debt of $60,149, substantially below the national public law school loan debt for that class of $69,687 and way, way below the national private law school loan debt of $106,249.

These numbers are decent, but we want to do even better.  We have developed great bar prep programs to maintain our status as a school with a top bar passage rate. We believe our community service mandate will allow more networking for future jobs.  I also make a pitch every time I talk to alums and other lawyers that they should be hiring our students.  Our new per hour student research program is also providing needed experience and again networking.  And as we implement our increasingly skills based curriculum, we believe our students will be even more competitive in the law and law-related marketplace.

We do not play games in reporting our statistics on employment.  For example, we do not hire students at specific times to build up our employment numbers.  We push as hard as we can for  full disclosure by our students of their job status.

But now comes my shocking statement. I do not believe we have too many lawyers. The American people are under-lawyered.  I’m not talking about those lawyers who specialize in boutique practices or serve business or work in government.  I’m talking about servicing the rest of us.  If one is poor or even middle class, one only goes to a lawyer when they have a problem.  They seldom seek a lawyer’s assistance to avoid or prevent a problem.  We must find better ways to make routine legal services both affordable and available.  Have a lawyer check your credit card agreement!  Have a lawyer read your closing documents for your house and then attend the closing!  Have a lawyer prepare your will!  Have a lawyer write that letter to the store owner or government official who is non-responsive or worse!

When I was younger [yes, I was once young], people went to a doctor when they were sick.  They didn’t go for a checkup or diet assistance or even for scrapes, minor injuries or a cold.  But now most people have medical plans and they do.  The concern now is that we do not have enough doctors.

In a recent article in the Economist [September 3, 2011], the editors talked about a recent books that argued that the number of lawyers has been kept artificially low for decades.  Barriers should be lifted; prices for services should go down; alternatives to traditional fee paying must be explored.

I agree. And I believe that present students will fill the gap and provide for the delivery of legal services to the majority and not, as now, the tiny majority.